Posted on October 02, 2012  by Office of Communications

The dedication of the Black Family Visual Arts Center and installation of Ellsworth Kelly's Dartmouth Panels are celebrated in a video featuring lead donors Leon Black ’73, Greg Maffei ’82, Charlie Nearburg '72, Thayer '74, and the Stern family—Michael '59, Tuck '60 and Marjorie and their children, Betsy ’84, Mark ’85, and Ricki ’87. 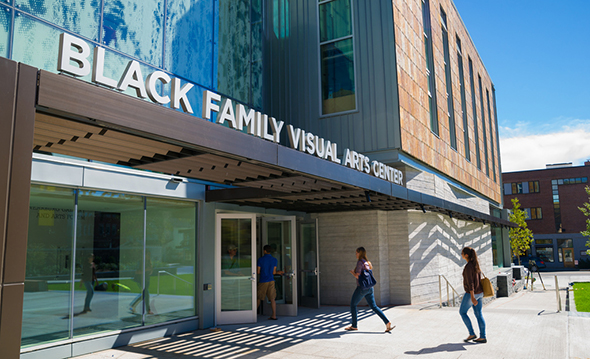 Dartmouth celebrated the opening of the Black Family Visual Arts Center and the formal unveiling of Ellsworth Kelly’s Dartmouth Panels on September 14. (photo by Eli Burakian ’00)

Former Trustee Leon Black talks about his early introduction to art and the influence his mother, a painter, and his aunt, an art dealer, have had on his lifelong love of the arts. He also talks about his vision for the new Visual Arts Center and the entire arts district at Dartmouth.

“My hope for this building and for the whole area is that this is a welcoming home where students can go to learn, where they can go and feel it’s okay to make mistakes, they can find out more in discovering themselves. They can turn their own dreams and visions into realities,” Black says.

“If Dartmouth can help generations of young people who have imagination and curiosity,” says Black, “then I think it’s well worth it.”

In the video, President Carol L. Folt says the new Visual Arts Center “is allowing us to do something for our students and our faculty that is transformative, and it’s going to stretch well beyond the arts itself. It will involve the campus, and it allows us to say that that entire arts district is central to this campus’ heart.”

The video premiered September 14 at the opening celebration dinner for donors.

The Year of the Arts is a celebration of the excellence of the arts at Dartmouth. Major initiatives this year include the opening of the Black Family Visual Arts Center, the 50th anniversary of the Hopkins Center for the Arts, as well as a yearlong series of interdisciplinary academic programs that explore the intersections between the arts and other disciplines.

Dartmouth has long been a leader in integrating arts into the collegiate experience: from the establishment of one of the nation’s first campus-based performing arts centers, to the commissioning of new works and artist-in-residence programs. The diverse series of arts programs and initiatives this year exemplify Dartmouth’s historic commitment and role as a model for the artistic campus of the 21st century. For more information, please visit arts.dartmouth.edu.