Posted on May 27, 2010 by Office of Communications 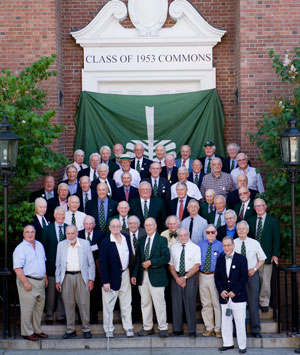 Members of the Class of 1953 gathered in Hanover on May 25 to celebrate the naming of the Class of 1953 Commons (formerly Thayer Hall). The class's $12 million gift supports a major renovation that will modernize the building and improve dining and social space. (Photo by Mark Washburn)

Carolyn Pelzel, senior vice president for Advancement, observed, "This project is a tribute to the dedication and perseverance of the great Class of 1953. It shows the continued commitment our alumni make to Dartmouth and to the experience of their successors."

The renovation of the building will begin immediately following Commencement and Reunions, and is expected to be complete in the fall of 2011.

In 1992, members of the Class of 1953 established a trust and the goal of making an impactful gift for their 50th Reunion. They raised $12 million, exceeding their initial target. Together with President Emeritus James Wright, they developed plans to build a new facility with dining and social space located at the north end of campus.

When President Jim Yong Kim succeeded James Wright in July 2009, Dartmouth, like many other institutions of higher education, faced serious budget challenges. The College had to reconcile that fact that the generous gift would not cover the full cost of the new building.

President Kim "met with our class in the fall and promised to return to us with a plan for our gift," said Bob Simpson '53, chairman of the Class of 1953 Charitable Trust. "We have learned that President Kim is a man of his word. [Without his] creativity and perseverance, we would not be here dedicating the Commons."

As a cost-conscious alternative to new construction, the College proposed the renovation of Thayer Hall. No additional expense will be added to the College's operating budget.

"The building will look much more modern and will provide more space for dining and also studying or simply gathering. We want it to facilitate interactions between students, faculty, staff, and community members," says Matt Purcell, associate director of Planning, Design, and Construction. The energy-efficient modernization will reduce the College's expenses over the long term.

The Class of 1953 Commons was originally built as Thayer Hall in 1937 with College funding. It was named in honor of former Trustee Harry Bates Thayer, Class of 1879. His portrait will remain on display in recognition of the building's history.