Class of 1984 Leads Construction of New Student Housing at Moosilauke

The Class of ’84 Crew Cabin will house student employees of the Ravine Lodge.

Thanks to an impressive volunteer effort from alumni and students, a glistening new timber-frame cabin made from 20 Eastern White Pines logged in Vermont now stands near the Dartmouth Outing Club’s (DOC) Moosilauke Ravine Lodge. (View photos from the May 30, 2010 dedication.)

The 12-bunk Class of ’84 Crew Cabin will house student employees of the Ravine Lodge, which was built in 1938 and is located 50 miles from campus in New Hampshire’s White Mountains. Dartmouth students have traditionally worked summers cooking, cleaning, and helping with the upkeep of the lodge, which averages 5,000 guests a year. 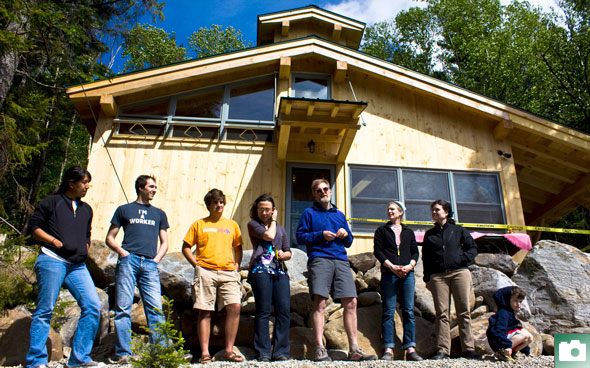 During the cabin's dedication on May 30, 2010, Director of Outdoor Programs Dan Nelson '75 stands with members of the "Lodge Crew" (student workers at Moosilauke) and thanks members of the Class of 1984 for leading the cabin-building effort. (Photo by Justin Tzou '10)

In July, Robin Meyers ’10, now a graduate student at the Thayer School of Engineering, spoke about the new quarters he shares with five other student workers. “It’s luxurious,” he says. “The previous loft was above the lodge’s kitchen and it was pretty dark and cramped. Here, it’s spacious and there are a lot of windows. It still even has that smell of freshly cut wood.”

David Hooke ’84, a professional carpenter from Vershire, Vt., led the construction effort, which consisted of 10 work weekends over the past year and an intensive weeklong timber-framing workshop in September 2009. Hooke estimates that about 80 volunteers (about 30 of whom were undergraduates) put more than 1,500 hours into the project.

Hooke said a key moment in the process came during 2009 Reunions in June, when a group of five Class of 1984 architects led by Cary Bernstein ’84 got involved. “They reworked the original concept into a model of sustainable design,” says Hooke. The architects introduced enhancements such as: natural lighting, ventilation from high windows, on-demand water heating, and siding certified by the Forest Stewardship Council.

While the main funding for the project came from members of the Class of 1984, DOC members from the classes of 1937 to 2006 contributed to the project. “It was truly a team effort, and I think all feel honored to be part of the evolving story of Dartmouth at Moosilauke,” says Hooke, a former general manager of the DOC and the author of Reaching that Peak: 75 Years of the Dartmouth Outing Club. Hooke notes that there may be more cabin building opportunities in the future, as some alumni have discussed renovating the four bunkhouses at the Ravine Lodge. 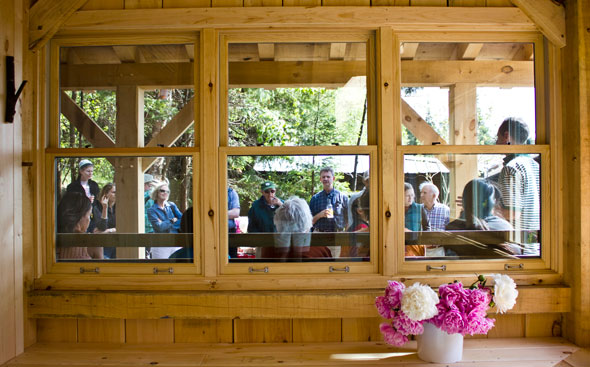 As an undergraduate Viva Pomeroy Hardigg ’84 spent her summers working at Moosilauke, and she slept in those cramped quarters. This past year she drove up from her home in Greenwich, Conn., on two weekends to help build the cabin. “There was a wonderful collaborative spirit and sense of camaraderie among the volunteers,” says Hardigg, whose tasks included cutting siding with a miter saw and installing it with a nail gun.

Hardigg said the significance of DOC traditions were palpable during the cabin’s dedication on May 30, 2010, where attendees ranged from ages 1 to 91. "To know that future Dartmouth students working at Moosilauke now have a cozy nook that's all their own—that's wonderful," says Hardigg.